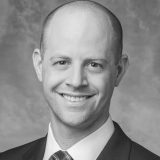 Joshua L. Brothers is an experienced advocate and attorney in disability and elder
law, estate planning, and probate. He is a long-time leader at Brothers &amp; Henderson,
P.S. A partner at the firm for over a decade, his practice focuses on litigation and
settlement planning; the development, implementation and administration of
special needs trusts and other types of trusts; estate planning; guardianship;
benefits advocacy; benefits litigation; and probate.
With a strong commitment to the disability and senior communities, Brothers
actively serves as a leader and advocate for numerous community organizations. He
current serves on the Board of Directors for the Brain Injury Alliance of Washington
and on the CLE Committee for the Washington State Association for Justice. He has
previously held voluntary positions as the president of the Board of Directors for the
Arc of King County as the CLE Co-Chair for the King County Bar Association
Guardianship and Elder Law Section and as a member of the Board of Directors for
the Arc of Washington State, the Professional Advisory Board for the Autism Society
of Washington, and the Tyee Sports Council.
Mr. Brothers, named as a Super Lawyer for 2019. He was also named as a Rising Star
by Washington Law &amp; Politics for 2009 and 2010. He is a frequent presenter at
continuing legal education seminars, parent group meetings and other conferences,
and symposiums on issues related to his areas of practice.
He was admitted to practice in the State of Washington in 2004, the United States
Federal District Court in 2004, and the State of Oregon in 2017. Brothers received his
Juris Doctor from the University of San Diego in 2004 and his bachelor’s degree in
political science from the University of Washington in 2000. Brothers is a member of
the Washington State Bar Association, King County Bar Association, the Academy of
Special Needs Planners, the Washington State and American Associations for
Justice, the Arc of Washington State and King County, and the Brain Injury Alliance
of Washington.
When he’s not practicing law, Brothers enjoys spending time with his wife, two
daughters, and three dogs. He is an avid surfer and skier. Prior to law school,

Brothers was one of 60 cyclists in the 1999 Journey of Hope bicycle ride from San
Francisco to Washington, D.C., raising money and awareness for people with
disabilities.